OnePlus Nord CE 5G Review: Getting all the essentials right

OnePlus re-entered the mid-range smartphone market with the launch of the Nord line last year. The first phone in the Nord lineup offered great performance at a great price, making it one of the best mid-range devices of 2020. Although OnePlus has launched a few more devices in the Nord lineup since then, none have been as popular as the original OnePlus Nord. But the newest addition to the lineup — the OnePlus Nord CE 5G — seems to have more potential.

The OnePlus Nord CE 5G offers almost everything you would need on a mid-range device, including smooth performance, a great display, good battery life, and decent cameras. I’ve been using the device for close to ten days now, and I think it stacks up well against similarly priced phones from Samsung and Xiaomi. While it doesn’t offer anything exceptional, I’m sure you won’t be disappointed if you choose to get one today. If you’re not convinced, read on to learn more about my experience with the OnePlus Nord CE 5G.

About this review: I received the 12GB/256GB version of the OnePlus Nord CE 5G from OnePlus India for this review. OnePlus had no inputs in any part of this review.

The OnePlus Nord CE 5G looks a lot like the original Nord. It has a similar vertical camera island, a left-aligned hole punch cutout for the selfie camera, and minimal bezels. In addition, the Blue Void variant I received has a fingerprint-resistant matte finish on the back, which does a decent job of keeping the device fingerprint and smudge-free. It also gives the phone a premium in-hand feel, which is further accentuated by the phone’s slim 7.9mm chassis. The button and port placement on the OnePlus Nord CE 5G is also quite similar to the first Nord phone. The Nord CE 5G has a power button on the right edge, volume buttons and dual nano-SIM card tray on the left, and a USB 2.0 Type-C port at the bottom flanked by a 3.5mm headphone jack and a speaker grille. The Nord CE 5G also features two microphones: one on the bottom edge and one at the top. Unfortunately, unlike the original Nord, the OnePlus Nord CE 5G doesn’t feature OnePlus’ iconic alert slider, which is a bit of a bummer. Over on the front, the OnePlus Nord CE features a 6.43-inch AMOLED display with a circular hole-punch cutout in the top left corner. The display refreshes at 90Hz, which helps apps and games feel smoother than on a 60Hz panel. The panel gets bright enough to offer decent visibility in direct sunlight, and it even offers Always-on Display capabilities. The phone also features an optical under-display fingerprint scanner which performs quite well and seems faster than the one on my Galaxy Note 20 Ultra. While the OnePlus Nord CE 5G’s 90Hz OLED display isn’t bad by any means, it doesn’t quite match up to the high refresh rate panels on a few other phones in this price range. For instance, both the Samsung Galaxy A52 5G and the Xiaomi Redmi Note 10 Pro offer 120Hz OLED panels at a similar price, which deliver a smoother experience overall.

Another feature missing on the OnePlus Nord CE, which you can get with the other two models mentioned above, is a dedicated microSD card slot. While most of you won’t miss it as the phone comes with a minimum of 128GB of storage, it’s always nice to have more storage in case you need it. The OnePlus Nord CE 5G comes with a soft TPU case and a Warp Charge 30T Plus charger in the box. The case is nothing to write home about. It’s just a generic clear plastic case that’ll do the bare minimum of protecting your phone from scratches and light bumps. The charger, on the other hand, is a bit more special. The Warp Charge 30T Plus charger not only charges the phone from 0 to 70 percent in just half an hour, but it also supports automatically reducing the charging speed if you charge the phone overnight for better battery health. So it offers the best of both worlds, letting you top up the battery quite quickly when you’re in a hurry and charge it safely when you have more time.

The design and build quality of the OnePlus Nord CE 5G is satisfactory. The phone feels great in hand, it has a good 90Hz display, the buttons feel nice and clicky, and I’m glad it has a headphone jack. While I do miss a few things, like the alert slider and the expandable storage, most of you won’t be affected by their absence.

The OnePlus Nord CE 5G runs OxygenOS 11 based on Android 11 out of the box. As with other OnePlus phones, the software feels buttery smooth and has no unnecessary bloatware (unlike many other phones in this price range). Interestingly, it doesn’t have any of the pre-installed Facebook bloatware that we found on the original Nord. If you’ve used any OnePlus phone in the past, you’ll feel right at home using the OnePlus Nord CE 5G.

OxygenOS 11 on the OnePlus Nord CE 5G is nearly identical to what you would get on a OnePlus 9 series phone. It offers a clean UI and a host of additional features. Despite the phone’s lower-end chip, the software feels snappy and I noticed no stuttering or lag during general use.

Access OnePlus Shelf by swiping down anywhere on the home screen

Google Discover feed integration on the minus one page

Much like with its flagship phones, OnePlus has promised to deliver two major Android upgrades and three years of security updates to the OnePlus Nord CE 5G. That means you can expect to receive updates to Android 12 and Android 13 on the device when they’re ready. In comparison, Samsung promises three Android upgrades and four years of security upgrades for the Galaxy A52 5G.

The OnePlus Nord CE 5G delivers exactly what you’d expect from a OnePlus phone in this price range when it comes to performance. Thanks to the Snapdragon 750G chipset, 12GB of RAM, and the great software experience, it’s fast and responsive in day-to-day use. I didn’t notice any delay while opening apps, and the phone does all basic tasks quite well. You’ll have to temper your expectations when it comes to gaming, though.

While the phone manages to breeze through most casual games, it struggles a bit with graphic-intensive titles like COD: Mobile, Fortnite, and Genshin Impact. While these games work just fine at medium settings, I noticed a few stutters after the phone started heating up. But that’s to be expected from a phone in this price range. The Snapdragon 750G is a mid-range SoC with an Adreno 619 GPU, so you really can’t expect it to deliver a gaming performance on par with the Snapdragon 888.

For those interested in synthetic benchmarks, the OnePlus Nord CE 5G scores 2,737 on 3DMark’s Sling Shot Extreme benchmark and 43 on the Speedometer 2.0 web benchmark. In Geekbench 5, the phone gets a single-core score of 639 and a multi-core score of 1,834. For context, these results are more or less the same as on the Galaxy A52 5G, which uses the same chipset. In AndroBench, the phone delivered sequential read speeds of 917.97 MB/s and sequential write speeds of 468.56 MB/s.

Unsurprisingly, the OnePlus Nord CE 5G’s battery life is top-notch. Its 4,500mAh battery, coupled with the power-efficient Snapdragon 750G chipset, helped the phone last just over one and a half days on a single charge with moderate use. With a few hours of gaming factored in, the phone lasted a full day with about 15 percent battery left. I’m sure you won’t face any battery issues with the OnePlus Nord CE 5G, especially since it comes with a 30W fast charger that can top up the battery for another full day of use in just half an hour.

The OnePlus Nord CE 5G’s camera hardware is on par with, if not better than, other phones in this price range. It features a 64MP primary shooter with EIS, an 8MP ultra-wide camera, and a 2MP monochrome camera to aid with portrait shots. Unfortunately, due to the ongoing COVID-19 situation in my country, I wasn’t able to go out and take many samples with the phone. But I did manage to capture a few photos around my apartment complex. As you can see in the images attached below, the OnePlus Nord CE 5G’s camera performance is good enough for social media use. The phone’s main sensor captures vibrant images with a decent dynamic range in bright-lit conditions, but it struggles a bit in low-light scenarios. The wide-angle camera isn’t all that great, though. Images captured with the wide-angle camera have a slightly different color profile, lower dynamic range, and they aren’t as sharp. 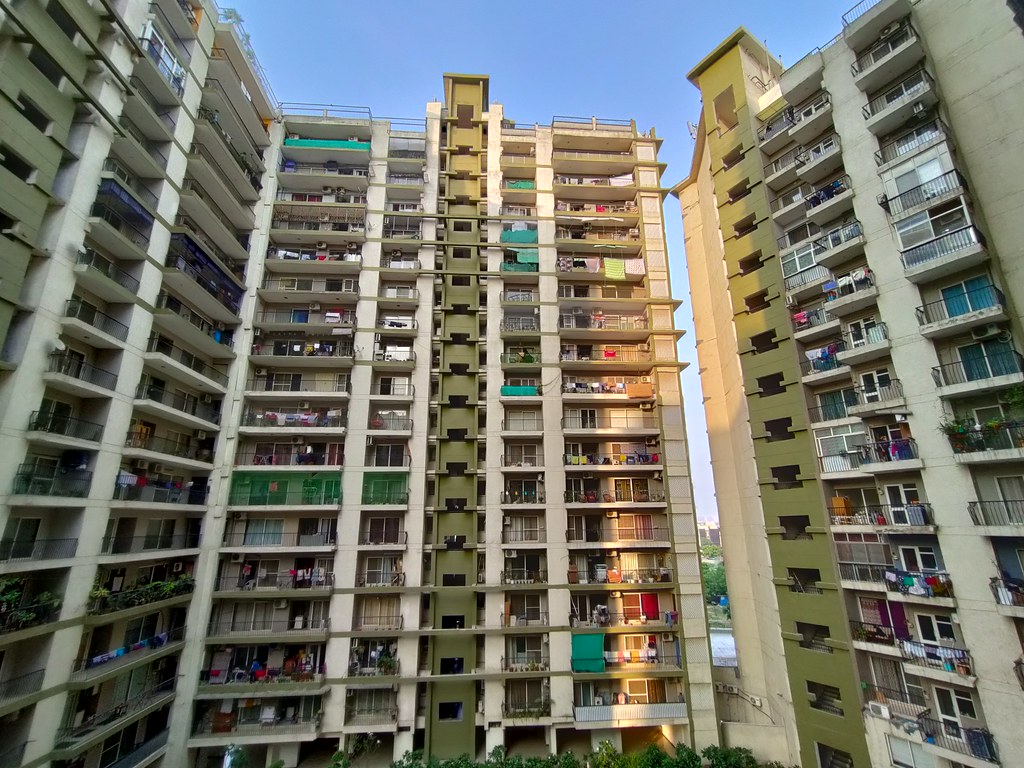 The OnePlus Nord CE 5G is one of the best phones you can get in the ₹20,000-₹30,000 price range, and it’s also a very good option in the UK/Europe where prices start at £299/€299 for the 6/128GB model. It offers all the core features you’d want in a mid-range phone, including smooth performance, a decent display, great battery life, and fast charging. The fast in-display fingerprint scanner and the 3.5mm headphone jack are nice to have on a phone in this price range, and the phone’s main 64MP camera is also quite decent.

The OnePlus Nord CE 5G’s great software experience is one of its major strengths, and it’s one of the main reasons I would feel comfortable recommending this phone to my friends. While OnePlus is betting big on the 5G aspect, I don’t see any reason for you to get the phone just for 5G if you live in India. India is still way behind when it comes to 5G adoption, and you’d probably have to retire this phone before 5G becomes widely available in the country. In Europe, where this phone is also available, 5G availability is more widespread, so its inclusion here is a necessity for futureproofing. If you’re an avid gamer, I would recommend saving up for a OnePlus 9R, a Xiaomi Mi 11X, or another Snapdragon 870-powered device instead of getting the OnePlus Nord CE 5G. Snapdragon 800-series devices come with a more capable SoC, which will give you a significantly better gaming experience. For those of you who want the highest refresh rate display at this price point, I’d recommend the Redmi Note 10 Pro or the Redmi Note 10 Pro Max. Both of those phones feature 120Hz FHD+ AMOLED panels, and the Pro Max even comes with a better 108MP primary camera.

The older OnePlus Nord, which comes in at roughly the same price, might look like a better buy on paper, but I wouldn’t recommend going with it for two reasons. First, it was launched last year so it won’t get as many software updates as the new OnePlus Nord CE 5G. Second, we’ve already started seeing leaks about the OnePlus Nord 2, so it might not be long before OnePlus discontinues the original Nord. Since OnePlus no longer has the best record of pushing timely software updates to older/discontinued devices, I wouldn’t recommend going for an older model. The OnePlus Nord CE 5G is one of the best mid-range phones out there. It offers great performance, amazing battery life, and an exceptional software experience without breaking the bank.

A Literature and Linguistics graduate with a keen interest in everything Android. When not writing about tech, Pranob spends most of his time either playing League of Legends or lurking on Reddit.